I created a wiki page to katix gforge for link collection.

I hope you like it. It is not sorted in any sense, but it contains lots of interesting links. A friend of mine has been sending these to me a quite long time and I thought that I could share the collection with you.

http://gforge.katix.org/gf/project/twinzygger/wiki/?pagename=MiscTechPapers
Posted by Unknown at 3:02 PM No comments:

New idea:
- A body that comprises of a laminar body and wing blended together
- There is a V-tail in a blended boom
- Rear of the center section has suction slot on top side
- The boom contains a electric fan that is used for suction and additional thrust
- There are two turbocharged Rotax 912UL engines in the wings which are hidden in blended pods that continue the airfoil shape of the wing without interruption
- Both engines turn additional turbochargers which drive generators which generate electricity for the rear fan of the aircraft

Items that need to be studied:
- does pressure thrust work with this kind of shape, or does it require axisymmetric body?
- compare the drag of minimum axisymmetric body with non-blended wings to a blended wing body which has larger cross sectional area, but potentially lower wetted area.
- wing incidence relative to the center section - center section has a lower aspect ratio than the wings and what it requires to achieve optimal lift distribution in this combined case
- the achievable gain from the lack of interference drag or very small interference drag
- optimal wing loading for a combined blended wing body compared to a pod+boom+wings solution
- shark fin shape on the outer wing sections, the gain and the issues
Posted by Unknown at 12:23 AM 7 comments:

Youtube video about Burt Rutan Ares
Posted by Unknown at 1:29 PM No comments:

I was looking Parson's high transition length body in a book and thought that maybe if I modify my body shape also so that the nose becomes sharper. By sacrificing some interior space, the flow acceleration can be kept for high transition length according the book I was reading this. My modified body looks like this. 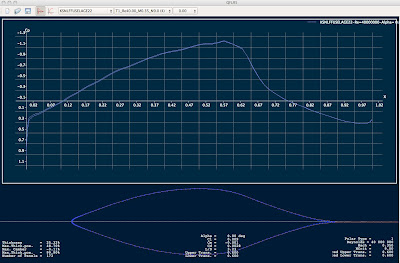 Ever wanted a Star Trek's computer? It is here today:

For starters, try out for example: integrate x+y^2
This service is superb.
Posted by Unknown at 6:08 PM 1 comment:

I have been thinking this topic for quite a long time and my old conclusion was that it is not feasible. However, there is very little information about pressure suits out there, but looking at the very little there is about the old Mercury suits etc., I have got indications that actually fabrication of a partial pressure suit might be feasible. Buying one might not be feasible because of lack of availability and insane pricing.

I would like to learn more about the topic, but in the Internet at least, there is very little or nothing. If someone has some insight, please leave some comments.
Posted by Unknown at 12:46 AM 3 comments:

A major portion of aircraft drag (in addition to the wing) is generated by the fuselage. The poor aircraft has to drag the draggy fuselage forwards. It is justified to target for reducing the fuselage drag in addition to the drag of the wings to achieve high L/D ratio and thus high efficiency and exceptional miles per gallon figure.

The idea comprises of the following claims:
- a laminar body with optimal fineness ratio for minimum drag
- a tail boom behind the optimal fineness ratio laminar pod
- electric motor (or couple of electric motors in cascade) turn
one or many ducted fans that are in cascade inside the rear of the fuselage.
The fan(s) take their air intake from the boundary layer of the fuselage.
- the fans are driven with batteries on takeoff.
- the fans are driven in cruise with electricity generated from the exhaust gas of the two gasoline engines which are mounted in wings.
- there is an additional turbine mounted in the exhaust that turns a generator rather than compressing air for the gasoline engine.
- the exhaust for the air is either in the tail boom prior to the tail or after the tail, whichever is found to provide best results.
- the fans provide suction for the fuselage boundary layer and also additional thrust for the aircraft. This configuration however, does not cause additional drag for the aircraft but reduces it.
- additional generators can be mounted to wing tip vortices so that the wing tip vortex turns the turbine blades and thus generates electricity for the fans located in the rear of the fuselage.
- the generators, battery charging and fans are computer controlled.
- the fans utilize all power that can be drawn from the exhaust gas and the wing tip turbines and thus runs at full power available to it continuously. On takeoff batteries are used to ensure high centerline thrust for the hypothetical situation where one of the gasoline engines would fail.
Posted by Unknown at 10:54 AM No comments:

I found these some time ago, but now got reminded about it also on one comment to a previous post. Therefore I decided to open a new topic for it:

Interesting reading for anyone interested in achieving major breakthroughs in the fuselage drag.
Posted by Unknown at 10:37 AM No comments:

One interesting aircraft in the historical data:

Aircraft with 12.28 lbs/hp power loading and 29.05 lbs/sqft wing loading in other words can
be made to climb, and it can also meet FAR 23 in stall speed requirement (61 kts). According to an article, the LC Evolution demonstrated glide ratio of 1:22 which is amazing compared to the competition, especially achieving this with only AR=10.3.

Challenges:
- achieving the stall speed of 61 kts, requires very high Clmax for the flapped airfoil
- achieving > 20 glide ratio with lower Re, requires higher AR most likely
- achieving positive climb rate with single engine
- achieve the Clmax with wings that carry two engine pods on them (blanketing potentially flap and part of the wing).
- The fuel potentially does not fit inside the wing of this low wing area.

What it shows:
- Still with this high wing loading, it would be possible to fit three adults on the plane with full fuel. The result is not at all bad compared to any production aircraft.
- Empty weight looks realistic taking in account there are two Rotax engines on the craft. It is higher than it would be if it was relatively as lightweight as a Dynaero.

Bottom line: The parameters of the Lancair Evolution are very impressive and inspiring.

-> It ends up in the magic 9.3 m2 wing area I have ended up from many directions already several times before.
Posted by Unknown at 4:50 PM No comments:

I have in our svn by the way a OpenOffice.org spreadsheet about historical data about the basic design parameters for aircraft. There are just couple of aircraft currently in the list, but I will add more later and also you can help, you can send me more lines to the sheet, just take the sheet as a template and fill your lines and send it to me karoliina dot t dot salminen at gmail dot com. I will copy-paste your additions to the table. I am particularly interested in fast composite aircraft and not so interested in the parameters of tube and fabric aircraft or metal aircraft (except interesting ones, like RV). All data even for fabric and tube, is welcome of course, but I wanted to let you know what I am interested in the most.

Here is the spreadsheet in OpenOffice.org format:
WeightAndBasicParametersHistoricalStatistics.ods

Here is the current version of the spreadsheet in PDF-format for quick viewing:
WeightAndBasicParametersHistoricalStatistics.pdf
Posted by Unknown at 4:30 PM No comments:

I decided to do svn up for QFLR5 and was delighted that it has progressed further. I decided to try out fuselage shapes this time because it turned out that QFLR5 now allows larger airfoil thicknesses than 20%. Therefore here is a 26% fuselage shape I created today.

Here is how I started it:
1. I took NLF414F airfoil which I know to have very low drag value at 10 million reynolds number.
2. I decambered to it to zero camber
3. I changed thickness to 26%
4. I changed leading edge radius: 30% from leading edge, 0.8 ratio.

The simulation result gives very low Cd-value. The problem in reality is that because of all intersections, and a hatch where one has to enter the craft, the transition point is not that great as predicted by the program most likely.

Here is another simulation, transition forced at 40% chord. The Reynolds number is the same, 41 million with mach 0.29:

I further adjusted the leading edge radius, from the above, I reduced it to 0.8 again.

Here is the result KSNLFFUSELAGE3:

The simulated polar for the NLFFUSELAGE3:

Obviously the fuselage is supposed to be flown at zero angle of attack on cruise flight, but for slight side slip situations it is good to know how the drag rises on the fuselage. It also affects to the stability negatively (for example because the lift slope is not at all linear).

Potential improvement idea for use in non-steady flight: widen the low drag bucket a bit.

The airfoil shape as a axisymmetric fuselage (or as a generic pod, this works also as a engine pod), 3D illustration:

And this is how it looks from inside:

Structurally the pod requires thicker boom than the optimum and unfortunately the drag will be larger than the simulated one for the pod alone.
Posted by Unknown at 7:59 PM 1 comment: