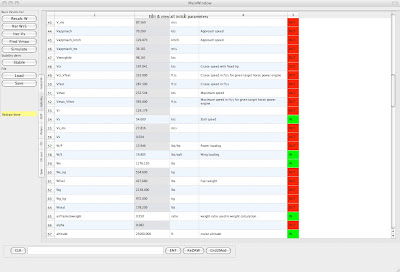 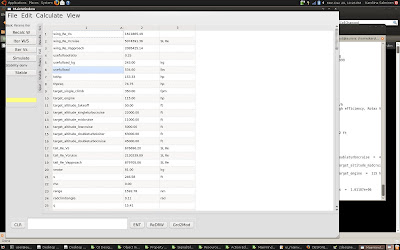 I created Qt-based UI for the aircraft design program I am writing. The initial version is available from here:

You need to have Qt 4.5 installed to run the binary.
Posted by Unknown at 10:15 PM No comments:

If you think one-of-a-kind aircraft, e.g. what Burt Rutan used to do during the early years. You want to build a twin on a shoestring budget. Then you realize that you have to buy two of everything. What if you have two engines already hanging around but they are not exactly the same make, model and horse power.

In case of center line thrust, no problem. Nothing requires the two engines to be the same. Not even weight and balance. Burt Rutan's Voyager is an example. You can find that the front engine is different from the rear engine.

It might not be because of the reason described above, but if you are into auto conversions and designing a twin, how you plan to get two identical engines for not much cost at all (from totalled cars for example). Might prove to be a challenge, especially in a country like Finland where the population and the availability of engines might be poor. With center line thrust you can use different engines in the front and rear.

By the way: Merry Christmas and Happy New Year!
Posted by Unknown at 1:27 PM 2 comments:

I found a quite interesting site:
http://www.nextcraft.com/
There was for example a 1/3 scale Berkut/Long-Ez project. 1/3 scale RC-model is said to be minimum sufficient for modeling the full scale aircraft, so I find this example quite educational. As can be seen though, the airfoils are different than on the full size plane. This is necessary because of the very low Re of the model. It does not thus model it very accurately, so there might be still surprises on the full scale version when scaling up, but I think it would still be good to do 1/3 models of new aircraft designs.

The direct link to the 1/3 scale Berkut can be found here: http://www.nextcraft.com/berkut01.html
Posted by Unknown at 12:49 AM 3 comments:

Here is a interesting specification chart which illustrates the differences between different aircraft types:
http://www.flypas.com/images/DA40_comparison_feb_2008_rev_2_022408.pdf

I knew that information already, but this is a chart you can look at if you don't happen to know which is the difference between Diamond DA40, Cessna C182, Cirrus SR20 and Piper Archer. Needless to mention (but I mention anyway), the models utilizing composite high aspect ratio wings with super-accurate surface and laminar flow airfoils are the winners on this chart, namely the Diamond DA40 and Cirrus SR20. On this chart, the DA40 wins also SR20. Indeed, the DA40 is pretty good compromise, but the SR20 is not so bad compromise either. It has for example larger cockpit for larger people. However, bigger size does not come without a penalty and it is evident in the specs, SR20 takes more power to go as fast as the DA40 with 20 hp smaller engine (75% power = 135 hp whereas on Cirrus 75% power = 150 hp). The biggest losers on the chart, obviously, are made of metal (with protruding pop-rivets), and have turbulent flow over the low aspect ratio wing.

The same page also has a comparison made between trainer type aircrafts:
http://www.flypas.com/images/comare_da20.pdf

The comparison chart contains Diamond DA20-C1 Eclipse, Cessna C172, Piper Warrior and Cirrus SRV.
This is not completely fair because some of the planes are 4 seaters and some two seaters, but isn't still too hard to see the difference between the laminar flow planes compared to turbulent flow planes. Both Diamond DA20-C1 Eclipse and Cirrus SRV use laminar flow airfoil, slotted flaps and a high aspect ratio wing. Both are made of composite materials. I have flown myself the Diamond DA20-C1 Eclipse and the SR20 (the IFR version though, but it is no different from the SRV other than in terms of certification and equipment), both are really nice aircraft to fly and they perform pretty well when comparing to the competition. Of these, the DA20 is most pleasant although quite a bit slower in the reality than the Cirrus.

The page also has a performance vs. altitude chart for three aircraft types - 2 Mooney and Cirrus SR22 (normally aspirated version). From this chart, the effect of the turbo is quite evident on the turbo-version of the Mooney. At high altitudes it is the fastest of the compared aircraft. The comparison would get tougher if the SR22 was the turbo-model which cruises well over 200 kts at high altitude.

The comparison chart has some things which I am not in full agreement with. For example the front hinged canopy superiority. It gives good view from the cockpit yes, but it is stating that it makes it easy to get into the cockpit. That is very far from the truth. It is a lot easier to climb to a Cirrus through the door than to a Diamond. Getting into the Diamond is like getting to a sports car. It is not that difficult and I would not consider it personally a problem, but saying that it is superior in easiness compared to the side doors of Cirrus, that is bullsh*t. Cirrus is a lot bigger and easier to get into. Diamond excels elsewhere than on this. And there are other things too on this list, so please have your filter set to on when reading it. In a sense, the comparison chart in the plastic planes is better.

Here is the comparison from plastic airplanes:
http://philip.greenspun.com/flying/plastic-airplanes

And here is a Cirrus SR20 review:
http://philip.greenspun.com/flying/cirrus-sr20

And here is a Diamond DA40 review:
http://philip.greenspun.com/flying/diamond-da40
Posted by Unknown at 1:19 AM No comments:

Here is the Honda's tech paper about the SHM-1 airfoil (which was designed for the Honda-Jet). The airfoil includes features which are not important on low speed low Reynolds number flight but it also has features which makes it ideal for lower speed concepts:

SHM-1 could be a good starting point for an airfoil for GA-use. The Re area for the SHM-1 is a lot higher than needed by GA, so it may not be directly applicable, but the ideology in the SHM-1 seems just what would be needed for also high speed high efficiency, long endurance GA aircraft, which in addition to having low drag and high Clmax also exhibits good behavior.
Posted by Unknown at 9:19 PM 2 comments:

I found interesting paper which tells some details about some ultralight aircraft, the better, even about the TL-96 Star we previously owned. I find it quite interesting.
http://ctn.cvut.cz/ap/download.php?id=77
Posted by Unknown at 4:58 PM No comments:

I have stated here previously that the boundary layer suction maybe requires jet engine for having enough power to be wasted for the suction. However, a knowledgeable friend just sent me couple of (more) links as he has used to do now for quite some time. (Thanks by the way). Interestingly enough on this ppt: www.aoe.vt.edu/~mason/Mason_f/LaminarFlowS04.ppt on page 17 it has been stated that the example case of Piper Super Cub only required 2.0 hp for suction. Another example was Cessna L-19 with 17 hp used for suction.

This is very interesting since taking 2-17 hp out of e.g. 200 total hp (=2 x Rotax 914) is quite doable. With smaller engine power as the previously discussed 2 x HKS700E, the available excess horse power for suction would be obviously smaller and taking 7 hp out of the available thrust would be unwelcome whereas taking only 2 hp out of it would be clearly still within limits of potentially feasible and that benefit outweights the loss.

The achieved Clmax increase with boundary layer suction is significant. If on the Cessna example the Clmax increased from 2.5 to 5.0, that makes a whole lot of difference in wing sizing and in turn this affects drag and efficiency significantly.

The downside is that if the wing sizing is done with the expectation of Clmax of 5.0, and then because of mechanical failure, the suction is not available, the stall speed in such emergency would be high. Also potential failure modes are that the suction disappears on final approach or shortly after takeoff.

How to mitigate this potential problem? The suction mechanism would need to be very reliable and most likely it should be doubled. In other words, in twin engine aircraft, either engine should alone be able to supply enough suction so that in case of engine failure of one suction pump failure, the aircraft would not crash but could still safely land on the airport (with the remaining engine and remaining suction pump).

Another way to mitigate the problem could be to not count on the achieved Clmax but only take the benefit of the drag reduction caused by the suction. There comes the question then of the justification of the added complexity. One of the unknown issue to me is that how water ingesting through the perforated skin would be dealt with - it would be pretty severe condition to have whole suction slot full of water. In addition to the suction not functioning properly, the wing would weight significantly more.

What the complexity adds to the manufacturing cost? For small commercial general aviation aircraft (which is targeted to masses and which does not try to achieve anything special but be good all-arounder) it could add more than is justified for the benefits gained from market - simplicity and low cost manufacturing drive these rather than the last decimals in the efficiency. However, for experimental prototype aircraft which is built on basis that price of a work hour is not counted, at least then this might be a feasible idea to incorporate. This would require more investigation, and it could depend quite much on the aircraft configuration, how much gains this could add and what kind of tradeoffs there are to be expected in turn.
Posted by Unknown at 1:26 PM 7 comments:

Latest version of my aircraft sizing and estimation utility

Here is the latest version of this (currently command line based but later planned to have a Qt UI) utility. The binary is for MacOSX Leopard (Intel binary). You should run it from terminal.

How to use (shows couple of iterations for a small two place twin engine aircraft using two HKS700E engines):

The program compiles without modifications under Ubuntu Intrepid. Windows version is not available or planned at this time. No support for the usage for the program will be given at this time.
Posted by Unknown at 1:17 AM No comments: