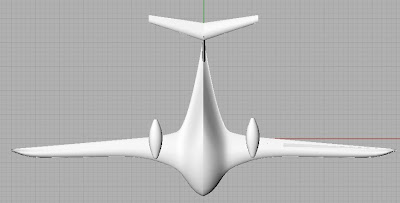 Created with the latest iRhino alpha.

I was reading today the book "Fluid dynamic drag" a bit and got kind of inspired: canopies and wind shield discontinuity contributes very much to the drag coefficient of the fuselage. Not only the laminar nose seems important, but all kinds of places where something ends and something else continues are sources of waste of engery.

So if the plane is completely faired with no discontinuity of any kind, theoretically the drag coefficient should be very low.
In this picture, the engine nacelle placeholders are just placeholders, because they are not yet accurate airfoil, and it has not been taken into account that in Rotax engines the propeller shaft is not in the middle of the engine, but almost on the top of the engine, this creates a fairing that has the lower side turned up a bit and is therefore not completely symmetrical.

The engine nacelles may need to be moved outwards, otherwise there is not enough clearance between the fuselage and the propeller arc.

I was also reading one day some NASA tech paper about wing tip mounted propellers. I have not drawn such things to this picture, but I may add it later - small brushless DC motor on each wing tip lowers the induced drag quite a bit according to the tech paper (although on high aspect ratio wing the effect is not that radical as on with a low aspect ratio wing that would otherwise be poor).

Potential issues for placing engine nacelles on wings (which seems pretty necessary for a twin, after all, may be the least bad compromise) and blending are the followings:
* the wings take a lot room to build (because they are very long)
* making the mold is difficult, because it has to be done from CNC cut pieces and glued together
* moving the center section to airport or transporting it in a container may be challenging, because if the area up to engine nacelles is continuous part of the center section and not separatable, it means that this is basically wider than the width of the container, shipping the plane to another continent might be a challenge (it seems that it would need to be flown like the design point has been set)

Have you thought about the problems in pressurizing a BWB cabin at extreme altitudes?

Do the engines have enough spare power to pressurize the cabin?

A tube shape cabin allows for even pressure on the cabin walls. A BWB cabin does not.

>Have you thought about the problems in >pressurizing a BWB cabin at extreme altitudes?

Unfortunately that is one of the unresolved problems in the idea. Yes I have thought that, but I am not with a known solution.

>Do the engines have enough spare power to >pressurize the cabin?

That is also not known currently because I have not studied pressurization, and I do not know how much power is required to pressurize the cabin. Basically the story is that the turbo pressure is very much needed in the engine rather than bleeding it in the cockpit as the altitudes in question are such high that without two turbos the engine would potentially not run at all or at least would not be providing any meaningful amount of power.

>A tube shape cabin allows for even pressure on >the cabin walls. A BWB cabin does not.

Hi Karoliina,
If you are worried about the effect of drag of the engine nacelles you might be able to reduce this using a ducted fan and being buried in the fuselage, the hookup to cabin pressure compressor would be simpler? The ducted fanintake if properly designed could also provide some measure of "pre-compression" to assist the turbos at high altitude.
Regarding the problem of cabin shape on pressurisation, I would guess that an elliptical cross-section would work as a compromise that could be incorporated in the BWB format?
Cheers
Greg

Greg, the ducted fan would be interesting, but it is pretty hard to accomplish: the duct will function well only if the duct blades have adjustable pitch. It should be quite doable, but it is not very simple thing to do. Buried ducts over the wing could be otherwise very good. Fixed pitch duct works only at one design point and is not at its best in an aircraft which should be able to fly both at high altitudes and take off from low altitudes. Any ideas for this (how to make constant speed fan) are welcome.

Hi Karoliina,
Regarding the fixed pitch ducted fan, I don't know a great deal about them but as a thought experiment, you could consider the following: to provide a given amount of thrust, you need to accelerate a given mass of air at a given rate, now if this is optimised for cruise at msl then the plenum chamber under those conditions will mean that the fan will "see" the air under some fairly constant conditions. If we now change the altitude to say 40,000ft the air density will be about 25% of the msl figure so we need 4 times the volume per unit time to be passed into the plenum so that the fan "sees" the same conditions as at sea level. My suggestion is that from a mechanical complexity perspective, it may be simpler to vary the inlet area by up to a factor of 4 rather than create a variable pitch fan. I have of course completely ignored the aerodynamic implications but I think it is doable. This would have the further advantage that bleed air from the plenum could provide the engine(s) with fairly constant pressure air intake, the plenum pressure could be monitored and the adjustable intakes automatically resized according to the plenum pressure?
Just a thought.
Cheers
Greg

Can anyone tell wats the software used to draft the airplane

Any clue on what the NASA paper was? (The one with the wing tip mounted propellors?)