Illustration for the previously mentioned idea

Here is a rough illustration about the configuration layout. This picture is not drawn into any scale dimensions, it is just "artistic" illustration of the idea. I did not draw taper to wings etc. because I wanted to draw it quickly. Here is the picture: 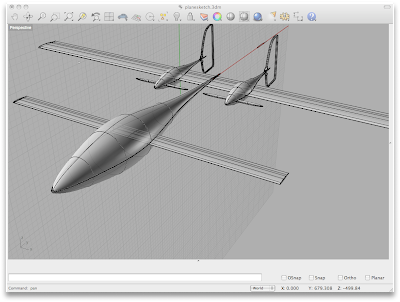 The drawing program is by the way the Rhino3D for MacOSX, a pre-beta -version of it, I am privileged to be a beta-tester.

Basic locations I had in mind:
Seats are in front of the canard wing. The fuel and baggage is stored between the canard and main wing. The engine nacelles are more forward than in the Long-Ez derivatives. They protrude from the main wing forward in a similar manner like they would be additional fuselages in midwing configuration. The engine nacelles are not necessarily fat enough to look realistic, but they hopefully deliver the basic idea, as this is not a final drawing but a computerized sketch of the configuration layout. The two horizontal stabilizers are in the propeller stream because that way they are more effective than winglet mounted rudders would be on a canard aircraft, and instead of becoming effective at relatively high speed, these can be made to be effective from almost zero speed, similarly than conventionally configured aircraft.

The idea is influenced by this:
http://www.scaled.com/projects/proteus_specifications.pdf
Posted by Unknown at 5:31 PM